Five and one half months into 2018 and I can’t help but be reminded of Herman the Hermit’s snappy rendition of: “I’m Henry the VIII, I Am,” from the Ed Sullivan Show in 1965.  (https://www.youtube.com/watch?v=GisCRxREDkY)

The recollection has nothing to do with the British Royals or my nostalgic pining for more innocent times (this took place 6 years before I was even born!) but simply their use of this brilliant lyrical bridge that, to this day, conjoins musical stanzas, chanting crowds and even stock market cycles: “….Second verse, same as the first!”

You could say that it has been “De Ja Vu All Over Again1,” in this year’s first half as patterns of repetition predominate….courtesy of consistent catalysts.

Coming out of 2017, which by many measures was the least volatile year in market history (see below)2, it seemed likely that the calmness would break. 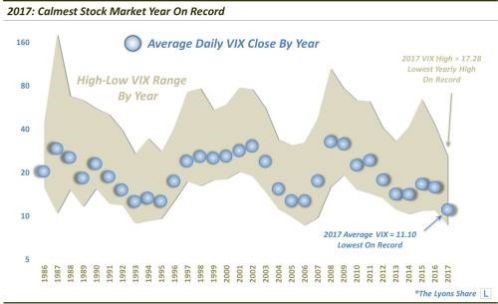 And break it has!  The market’s fear gauge (the VIX Index charted above) spiked to over 35 in February – a level not seen since 2011 – before it dropped below 15, popped back to 25 and now sits again below 15…..still roughly 30% above last year’s closing level3.

The source of any market’s maelstrom may be mysterious but that has not been the case this year.  In fact, its movements have followed a 4-prong paradigm popular for purification: Wash, Rinse, Sterilize, Repeat!

The Fed had been tracking on a very slow and progressive path toward normalization after its extraordinarily accommodative heroics performed during the financial crisis.

But in late January, the script was flipped: new economic data characterized the economy as growing faster than that for which the Fed had been preparing.

It was a perverse but classic case of good news being bad news. The “good news” is obvious: economic and job/wage growth. The “bad news” is that such growth can be inflationary. And inflation erodes the purchasing power of the consumer and elevates the expenses of the corporation.

Quite suddenly, the Fed was being viewed as, “out of touch” or “behind the ball,” and expectations immediately reflected a quickening pace of its tightening policy. Just like that, the Fed and the investor went from being allies to adversaries.

Stock and bond prices dropped swiftly and yields ripped higher – from 2.59 to 2.95 on the US 10-year Treasury4 in a matter of days. The market felt foreboding and offered no place to hide….at least for a little while.

As additional data offered counterpoints to the readily-adopted, runaway inflation scenario, things calmed down a bit, until….politics and geopolitics moved to center-stage.

Rinse: Say this about President Trump….not only does he not shy away from frenetic environments, he thrives in them. So much so, that he could be accused of creating them purely for sport or custom or whatever endorphin-inducing quality he and they symbiotically share.

From cabinet defections, to impeachment rumors, to trade tariffs, to Congressional realignment probabilities – all have conspired to undermine one critical force present in market advances: confidence.

Confidence is nebulous, it is unquantifiable and it is backward-looking. It is also the core construct of the “animal spirts” that promote risk taking in capital markets. Antithetical as it may sound: taking risk is essential to the market maintaining its composure.

When investors allow their allocation decisions to be influenced by Tweets, headlines or hearsay, intra-day price fluctuations tend to elevate as risk heads for the exits.  This will typically sustain until the maximum negative impact of such influences is reflected in current prices, after which some calm returns.  Such was the case in March and April of this year, clearing the path for focus to be directed at corporate profit reports.

Sanitize: Thankfully those corporate profits did not disappoint – growing over 26% from the same quarter of the prior year and the most in many moons! (see chart below from Thompson Reuters). 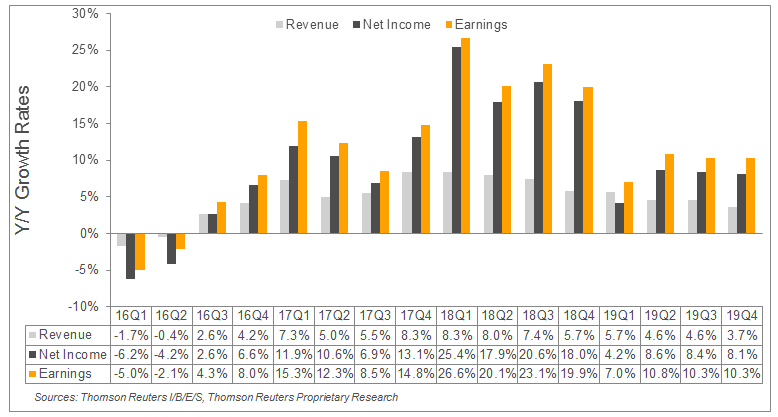 At first pass, such acceleration would be cause for celebration….and markets customarily celebrate by marching higher.  But no such party ensued.  Just the opposite in fact as investors fixated on the future instead of pinpointing the past, finding fault with companies that painted less pretty pictures of their prospective profitability.

Markets have often been referred to as discounting mechanisms – those that pull forward expectations of the future to be reflected in current prices.  Under this auspice, (and supported by the chart below), investors felt compelled to ask: “had the best of the future returns already taken place?”

Repeat:  As I quoted Herman the Hermit earlier, we now sit firmly in the second verse of the same tune in 2018. To wit:

Like all things, cycles are easily identified in hindsight. And like a lot of things, they are 80% form, 20% substance.

While there is information in the market’s meanderings, what there is not is strategic alteration of long-term objectives.

Our team intends to be opportunistic in the presence of additional verses of volatility but not to allow them to throw our long-term plans out of tune.

Important Disclosures:
The views expressed herein are those of Douglas Ciocca on June 11, 2018 and are subject to change at any time based on market or other conditions, as are statements of financial market trends, which are based on current market conditions. This information is provided as a service to clients and friends of Kavar Capital Partners, LLC solely for their own use and information. The information provided is for general informational purposes only and should not be considered an individualized recommendation of any particular security, strategy or investment product, and should not be construed as, investment, legal or tax advice. Past performance does not ensure future results. Kavar Capital Partners, LLC makes no warranties with regard to the information or results obtained by its use and disclaims any liability arising out of your use of, or reliance on, the information. The information is subject to change and, although based on information that Kavar Capital Partners, LLC considers reliable, it is not guaranteed as to accuracy or completeness. This information may become outdated and we are not obligated to update any information or opinions contained herein. Articles may not necessarily reflect the investment position or the strategies of our firm.