When the closing bell rang on Friday, we put to bed the first third of the “new” year.  A strong week in the financial markets confined April’s showers to the weather map, as both the Dow Jones Industrial Average and the S&P 500 posted a positive month1.

Market strength has persisted since November’s elections and all major US indices are up nicely year-to-date, as are most of their foreign counterparts2.

So, while marking time seems to get harder each year, marking markets has never been easier – information access is no further than your fingertips and attendant anecdotes are buttressed by your biases.

We would mark the last 4 months of the market by the following facets:

¼ #1: Domestic Politics.  President Trump just completed his first 100 days in office.  (I don’t know how many Tweets that translates to.  Likely a much larger number, so let’s just go with: too many).

Though widely followed, we find this threshold of his tenure to be no less arbitrary than suggesting a perfunctory period of dating prior to a marriage.

True that “huge” and “amazing” and “incredible” legislation has yet to pass a partisan House and Senate but equally true is the entrenchment of interests against which any neophyte needs to navigate.

“The first 100 days” is a Hallmark Holiday for political pundits – the relevance of its ruckus is statistically, well, irrelevant.  It was first mentioned by FDR in 1933 but has never been a useful gauge of a President’s effectiveness – just a short-term assessment of the traction in implementing an administration’s agenda.

President Trump did himself no favors by finagling the focus of the media on this timeline as it represents a mere 6% of his first term, so he could benefit a bunch from some broadening.

He could also benefit a bunch from some wins.  A proposal on tax-reform last week, a prospective vote on a healthcare bill this week and the ongoing dialogue on infrastructure initiatives may offer such an opportunity.  Tweetosphere….be prepared.

¼ #2: Geopolitics.  The world is very interconnected.  Codependency’s proliferate – economically, culturally and socially.  As does conflict.  And strong countries that are ideologically maligned tend to be sensitive to suggestions from the other(s) that theirs is not the preferred path to prosperity, however that may be defined.

The start of 2017 has found the world a bit more on edge than in the last several years.

The US has fired upon Syria as well as ISIS training facilities and hide-outs in Afghanistan.  Verbal and procedural sparring with North Korea has increased in magnitude and frequency.

The UK has begun its emancipation from the European Union, (BREXIT in action), and France’s Presidential election on May 7th has spawned the term, “FREXIT”, a condition considered likely should conservative party candidate, Marine Le Pen, take office.

Timber tariffs with Canada and the ongoing debate on the fate of the Mexican “wall” has the normally convivial continent of North America in a state of agitation.

Complex and competing interests deem a universal dictum to be desultory and each conflict will play out on its own timeline.  I think patience will be paramount as the world order restores just that….order.

¼ #3: Interest Rates.  Janet Yellen’s Federal Reserve Bank prides itself on transparency. After raising interest rates in December by a ¼ of 1% (their 2nd hike since December of 2015….and only the 2nd hike in 10 years!), they were clear about going slow and lingering low3.

And given the aforementioned stiff political and geopolitical winds, a patient Fed was thought to be a prescient Fed.

However, positive economic data points and improving business conditions4 prompted the Fed to act at their March meeting – raising their target overnight lending rate by another ¼ of 1%.

Higher interest rates are known to present challenges for both stocks and bonds.

For stocks, it is a dual-function of a higher cost of capital reducing cash flows (in the absence of pricing power to pass it onto customers), as well as the pure math behind discounting those cash flows by a larger number. (Nerd Alert: P = d/r-g where “r” = the discount rate).

For bonds, their prices possess an inverse relationship to interest rates:  higher yields tomorrow are a disincentive for lending money today.

The Fed is starting its “normalization” migration from a very low level, having dug deeply to refortify the credit beaches after the mortgage tsunami.

But as the table below indicates – Fed tightening’s are by no means the death knell for financial markets and we think the low base from which they are starting may serve as an additional salve: 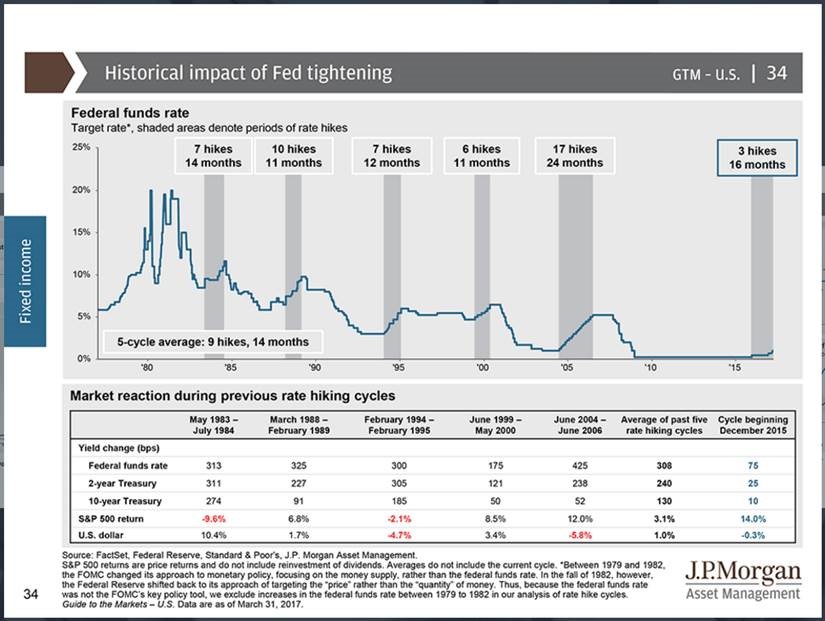 ¼ #4: Earnings. All investor eyes have been focused on the quarterly earnings reports that have been coming out the last few weeks as the pro-business optimism that accompanied President Trump’s November victory, and sparked the rally in stocks, has been under suspicion.

Rallies tend to be legitimized by a move higher in prices without a significant expansion in valuations.  If the earnings of a stock(s) increase as fast or faster than the price of a stock(s), then the authenticity and foundation of the rally are justified.  Better yet – combine that earnings growth with a positive outlook.

High marks for earnings so far in 2017, and some would certainly say that they provide justification of the market’s move.   This will raise the bar for continuation in this direction.

The 4 markings of the first 1/3 of 2017 are far from fleeting.  We expect their influence to extend throughout the year.

The 4 markings represent both macro and micro influences on markets and, equally important, on investor psychology.

Despite the strong earnings reports, confidence, which is critical to the capital market functioning, is delicate right now. We think that this argues for balance in portfolios and for management of those portfolios to be active.

Those allocations that emphasize a total return approach – income (interest from bonds, dividends from stocks) plus appreciation – may inflict less dramatic swings toward your objectives.

Those companies with profit models that can sustain higher interest rates, raging legislative debates and the fickleness of foreign affairs are likely in position to offer enduring value, but selectivity is central.

News headlines and Tweets tend to be unbalanced – often reflecting the predisposition of the reporter or poster.

Fear and greed will always be the price-setting emotions for investors in the short-term and outside influences prey on these emotions.

Our goal with clients is to look beyond shorter time horizons as it relates to setting our goals, but to be opportunistic in altering portfolios to take advantage of any emotionally-charged or macro-driven entry points that may prove beneficial over the long-term.

We’ll keep in close touch and will continue to update the markings of the markets as we move through the latter 2/3 of 2017.

The views expressed herein are those of Douglas Ciocca on May 1, 2017 and are subject to change at any time based on market or other conditions, as are statements of financial market trends, which are based on current market conditions. This information is provided as a service to clients and friends of Kavar Capital Partners, LLC solely for their own use and information. The information provided is for general informational purposes only and should not be considered an individualized recommendation of any particular security, strategy or investment product, and should not be construed as, investment, legal or tax advice. Past performance does not ensure future results. Kavar Capital Partners, LLC makes no warranties with regard to the information or results obtained by its use and disclaims any liability arising out of your use of, or reliance on, the information. The information is subject to change and, although based on information that Kavar Capital Partners, LLC considers reliable, it is not guaranteed as to accuracy or completeness. This information may become outdated and we are not obligated to update any information or opinions contained herein. Articles may not necessarily reflect the investment position or the strategies of our firm.