When my children were younger and smaller, there was widespread neighborhood concern about the safety of those new spring-loaded, high-netted and higher-flying backyard trampolines.

Not only, the wary warned, could there be issues with the integrity of the assembly, but so too with the frailty of the flipper.

With oodles of options for solid-surfaced stuff on which our kids could kill time, my wife and I forbade them from engaging in the bouncy battles of their buddies.

They protested….offering alternatives: they promised not to flip; they would only jump when no one else was jumping; they would never engage from the perimeter, only from the center – the spongiest part of the base – thereby constraining their propulsion.

We acquiesced given their offerings and it thankfully has endured without incident.  This has been assisted by the aging of our “little” ones and the short shelf-life of adolescent enthusiasms (remember Pokemon Go?)

But I’ve been struck by the corollary of this commentary to that of the more meaningful and advantageously alliterative 45th President of the United States and his interplay with capital markets.

Yes, to say that investors have been on a Trump-o-line since November would not be a stretch.

Donald Trump is wholly this: Donald Trump.  And no one at our firm sees that changing.  Do you?

At Kavar Capital, we’ve stopped starting sentences with, “I just wish……”  It’s futile and counterproductive. Wishing is not an investment strategy.

In just 2 months, we have spent more time with clients discussing President Trump’s prospective influence on the economy, currencies and investor psychology (most importantly and most pronounced) than I have personally done, cumulatively, in regards to any president in my 24 years in the investment business (I began my career in Bill Clinton’s first term).

The best thing about these conversations though is that they help us to pinpoint individual thresholds for risk and they reinforce the appropriate time frame within which we are making investments on their behalf.

Clients are, in essence, assisting us in optimizing their positioning on the Trump-o-line.

For that we are very grateful.  Any outside influence that motivates an honest self-inspection is invaluable to us as your advisors.

Left to our own devices, we are not so boldly ambivalent as to invalidate President Trump’s impact on the financial markets, but do respect the process of policy implementation and the time table to which it is beholden.  Hint: it is long.

We also understand the checks and balances inherit in our political system and while executive orders can obviate due process in the short-term, national interest tends to prevail.

And please don’t forget, that while jumping on the Trump-o-line is the newest game in Washington and Wall Street, it is hardly the only one.

Just across town sits the Federal Reserve Bank intent in some strategy shifting of their own – by possibly raising interest rates a few times this year1, thereby tightening monetary policy and potentially altering the altitude of any Trump-o-line bounce.

(As an aside, If you have a free half hour, this podcast is worth a listen: http://freakonomics.com/podcast/much-president-really-matter-rebroadcast/. It is from the Freak-o-nomics team who present anecdotal evidence of a President’s inability to influence most all areas of our lives).

President Trump came to Washington with many big ideas that could benefit businesses and subsequently their stockholders.  The most popular 3: tax reform, infrastructure spending and deregulation. 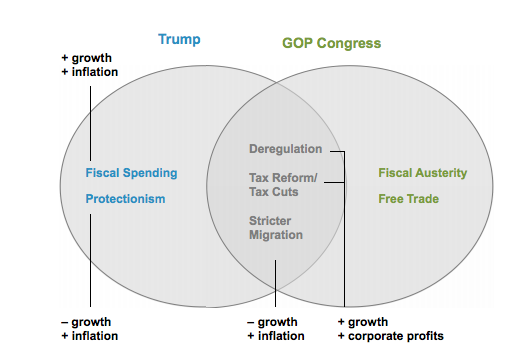 As the illustration above from Fidelity Investments indicates2, Congressional support exists for many of the President’s major initiatives.

The nature of each possesses, in theory, the power to raise inflation, which provides cover for the aforementioned Fed to advance along its path of rate normalization.

Those 2 preceding paragraphs represent something absent from the domestic economy for at least the last 10 years – collaborative and complementary policy actions! Harmony between fiscal and monetary policies that can, again in theory, raise economic growth, stoke underlying optimism and fundamentally underwrite risk.

It is for this reason, or this set of reasons, that the market has bounded higher on its Trump-o-line.  It is effectively a “flip” of the factions: lawmakers and monetary policy-makers are now attempting to coordinate their efforts.

Such an endeavor demands concentration – from both sides – in order to stick the landing. But, unfortunately, concentration is not a strong suit of the President.

Each Tweet, temper tantrum or taunt has tripped up the market, at least momentarily, before order gets restored.  Trump’s reputation as a businessman has bought him some patience and, at least for now in the financial markets, the benefit of the doubt.

The proving period of synergistic supervision is just getting started, but its grace period is not infinite.  The oft-cited 100 days seems reasonable to construct a foundation of interdependent policy.  Were it to fray or lack substance, we would expect elongated periods of volatility and consternation.

So, much as my wife and I monitored our kids from across backyards and through fence posts as they popped up and down for hours, so too must surveillance be deployed on the financial markets as they attempt to cheat gravity and contort toward safety.

We are optimistic on the collective interests of the powers-that-be to drive some success though it may well be inelegant.  Change in any fashion is challenging and the alignment of these otherwise disparate parties (the lawmakers and the monetary policy-makers) will likely involve some collisions.

Our goal is to keep your portfolios balanced enough to sustain the transitional period – all the pomp and all the circumstance that stands a good chance of signifying something constructive for the economy and capital markets.

The ideal spot on the Trump-o-line is apt to alter throughout the next 4 years and the agility with which we structure your portfolios will be critical in maintaining buoyancy.

Thanks for your confidence in Kavar Capital and we look forward to seeing you soon!

The views expressed herein are those of Douglas Ciocca on February 13, 2017 and are subject to change at any time based on market or other conditions, as are statements of financial market trends, which are based on current market conditions. This information is provided as a service to clients and friends of Kavar Capital Partners, LLC solely for their own use and information. The information provided is for general informational purposes only and should not be considered an individualized recommendation of any particular security, strategy or investment product, and should not be construed as, investment, legal or tax advice. Past performance does not ensure future results. Kavar Capital Partners, LLC makes no warranties with regard to the information or results obtained by its use and disclaims any liability arising out of your use of, or reliance on, the information. The information is subject to change and, although based on information that Kavar Capital Partners, LLC considers reliable, it is not guaranteed as to accuracy or completeness. This information may become outdated and we are not obligated to update any information or opinions contained herein. Articles may not necessarily reflect the investment position or the strategies of our firm.